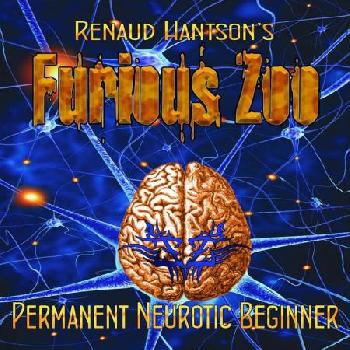 Add to cart
Renaud HANTSON's FURIOUS ZOO - Permanent Neurotic Beginner
CD 17 tracks (Big Rock / France - Paris) 2018
01. Heaven Is (Where You Are) 3’19
02. Strong 3’31
03. America 3’26
04. Let it Rain 4’34
05. It Kills Me 5’22
06. Voice of My Silence 5’00
07. Incredible 3’31
08. Ain’t No Sunshine 3’14
09. School’s out 3’39
10. Ain’t No Mountain High Enough 2’34
11. Face To Face 4’07
12. A Horse with No Name 4’13
13. Now He Has Gone 5’12
14. Fernando & Lucia 3’19
15. Number One 3’00
16. Anytime Anywhere 3’54
17. Hello from L.A. 3’07
FURIOUS ZOO, Renaud HANTSON’s Big Rock parallel project, hadn’t released a new album since 2016. With great delight, the band comes back with its ninth opus entitled "Permanent Neurotic Beginner”, at the end of October 2018. This new album comprises of no less than 17 songs.
For the occasion, a new line-up is brought to light and the aficionados will be able to applaud them on stage. If we can still admire Mike ZURITA, the virtuoso guitarist from every Hantson’s musical projects, and the crazy showman drummer Joe STEINMANN, the honor to play the bass belongs from now on to the brilliant Dimitri OBOLENSKY (ex-HELLECTROKUTERS). He will be backed by the special guest and familiar Pascal MULOT, who regularly performs in SATAN JOKERS too.
Renaud HANTSON was largely responsible himself for the choice and writing of the songs included in this new album, which made him think that this opus almost sounds like a solo album in English. It appears to be the perfect occasion to gather both his Pop and Rock audiences who seem to equally appreciate the mix of genres. Therefore, the band’s leader endorses various songs on his own, like the monumental "Heaven Is (Where You Are), the touching "Let it Rain”, the original "Face To Face” (on which BUTCHO, ex-singer from WATCHA, did some back-up vocals) and the super Heavy "Number One”.
Through the song "Now He Has Gone”, he pays a powerful tribute to PRINCE, one of the American artists that has impressed him the most. The lyrics are only based on the songs titles from the creator of "Purple Rain”. It is with great pleasure, Renaud HANTSON revives the modern Metal song, via a collaboration with Ricky MARX, the well-known talented guitarist from PRETTY MAIDS and NOW OR NEVER, who plays all the rhythmic sections on "It Kills Me”. On this same track, we can also admire the mind-blowing Aurel OUZOULIAS (SATAN JOKERS, MÖRGLBL…) at the drums.
Once again, the sing leader asked his friend Stephane NOVAK, guitarist and song-writer, to enhance three major songs : "Strong”, "Voice of My Silence” and "Hello from L.A.”, the delicate ballad that closes the album. Just like he did on previous FURIOUS ZOO’s productions, HANTSON’S right-hand man, Mike ZURITA also wrote some melodies: The rhythmic "Incredible”, the guitar acoustic instrumental of "Fernando & Lucia”, and the boogie melody of "Anytime Anywhere” whose lyrics are co-signed with Jean-Marc BONDIER, partner of the charity "Ensemble contre la Sclérose en Plaques”. The godfather of this organization is none other than the tireless singer, Renaud HANTSON.
"Permanent Neurotic Beginner” also gives Renaud a chance to revisit some anthological masterpieces : The melancholic "Ain’t No Sunshine”, written by Bill WITHERS, the explosive and Soul "Ain’t No Mountain High Enough » from Marvin GAYE, the David ESSEX’s hit "America” on which Thibaut ABRIAL (ex-JOHNNY HALLYDAY, ABRIAL’s etc.) plays the guitar solo, the mythical ALICE COOPER’s "School’s out” and last but not least "A Horse with No Name” by AMERICA.
Through this new album, let yourself be moved by the unique, enchanting and powerful voice of the energetic Renaud HANTSON who claims to be "at his best”, after having experienced a Transient Ischemic Attack (TIA) on June 2018, 30. Let yourself be carried away by the bass melodic lines of Dimitri OBOLENSKY and Pascal MULOT, and stamp to rhythm of Joe STEINMANN. "Permanent Neurotic Beginner” will allow the band to strengthen its leader position among the rare French Big Rock bands. And the evidence of this assumption should be confirmed soon on stage in concert.