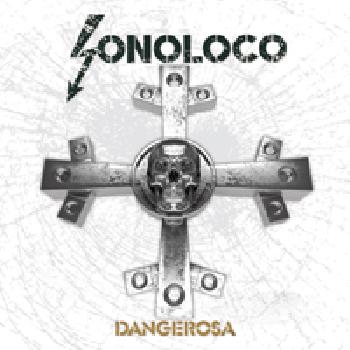 Add to cart
SONOLOCO - Dangerosa
CD 13 tracks (Rock Hard Occitan / France - Périgord) 2013
01. Intro 1’24
02. Mesfia Te 5’25
03. Les Montagnes Hallucinées 3’56
04. La Rentela 3’04
05. Dieu 4’34
06. Dangerosa 4’04
07. Occitania 5’11
08. Lo Gascon 4’25
09. Les Bombes 3’25
10. Occitan Warriors 2’40
11. Outsiders 3’14
12. Lo Leberon 3’47
13. Outro 2’49
Sonoloco is a french band formed during summer 1995 by Olivier Gourvat, Drums and Jeff Gareyte, singer and songwriter of the band. The band are often considered to be the precursor, or one of the earliest members of the Occitan heavy metal style due to the particularity of the combo is to sing in Occitan, the language spoken since the middle age in the south of France by the formers poets, the troubadours, (even if the band sing also in French and in English).
Sonoloco are typically classified as heavy metal, but also with influences like hard rock, punk rock, speed and thrash metal. The influences of the band are: Motorhead, Iron Maiden, Spiritual Beggars, The Cult, (but also Trust or troubadours’song). Sonoloco lyric’s typically cover such topics as, legends, sorcery, politic, sex and rock n roll way of life.
In 1998, Sonoloco recorded a 4 tracks named “Lo Tabanar”. This first effort received good critics and especially one in one of the most famous French metal magazine and the band start to play everywhere in the south west of France ending is first tour by a good concert in one of the most famous concert place in Paris, “Le Gibus”.
In 1999, Sonoloco started to work on their first studio album, entitled, “Silenci”, however, the rock n roll way of life wich resulted in the departure of Guillaume, the former guitarist, then Alex and Paco joined the band as new guitarists but left the band soon with Didier, the former bassist of the band. The first LP is delayed, postponed, then aborted. They were replaced by longtime band friends, the bassist Julien Fraysse and the guitarist Cédric Prougent. This strong line up started to gain some local success doing live shows and decided to record a new LP named “Mesfia Te”. The new LP is released during summer 2006, the tracks “Mossur Deubeuliou” and “A coup de 12”, are played on the local radio and the band start new live shows to promote it.
By 2009, Sonoloco released is second LP entitled “Nos sem Aqui” an album much heavier, and the band start to play in professional festival.
In January 2013, Sonoloco recorded is brand new album, “Dangerosa”, produced by Jean-Paul Trombert and the band, (released in april 2013) and the LP received numerous good critics on French metal site. The band are actually planning a tour for summer 2014, meanwhile the tracks “Dangerosa”, “Les bombes”, “Les montagnes hallucinées”, are playing on metal radios.
Add to cart