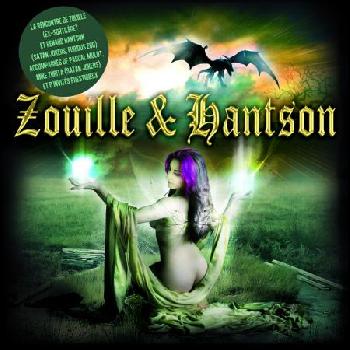 SATAN JOKERS and SORTILEGE, two French cult metal groups of the 80’s, were pioneers of the genre in this country. We can’t help being thrilled at the union of these outstanding musicians, led by Renaud HANTSON at the drums and as producer and Christian "Zouille” AUGUSTIN as lead singer.
Together, they revisit eight titles of SORTILEGE, in more modern, « straight » versions, without fiorituras or useless effects which would have spoiled the essentials, that is to say Zouille’s voice, in all its richness. Hantson has voluntarily withdrawn from the lead vocals, to focus on his drums playing, which remains as efficient as ever. Should it come to energy ("D’ailleurs”, "Civilisation Perdue”, or the classic "Sortilège”), or to emotion ("Quand un Aveugle Rêve”, "Marchand d’Hommes”), all is pregnant with a heroic fantasy atmosphere ("Gladiateur”, "Chasse le Dragon”, "Le Cyclope de l’Etang”). Their fans will be delighted to hear again all these songs which had an impact on a whole generation of French Hard Rock enthusiasts.
They also present us with two extracts of the first "Furioso” album, released in 1992, that Hantson wrote specially for Zouille’s unique voice ("Just Keep Holding on”, "Get out”).
You can also discover two titles recorded in 1987 by this cult duet of Metal for a FM Rock project which, finally, was never carried out. When you hear them, you can’t help thinking that it would have been a pity if they had remained locked in a drawer ! Four titles recorded in a concert complete this testimony-album, enabling us to appreciate the whole range of these musicians’ abilities on stage.
This album is the symbol of a friendship between the two men. It must be remembered that Zouille had chosen the "Satan’s Fest” ( Festival organized by Renaud Hantson, whose fourth edition will take place at the "Pacific Rock” in Cergy on January 5th 2013) to put an end to his career. Then, this disk will be the final achievement of these two fellows’ collaboration. Hantson really wished that all that could be engraved and leave a mark.
It also brings out the virtuosity of SATAN JOKERS’ present line up : the excellent Pascal MULOT at the bass and the outstanding Mike ZURITA at the guitar, both of them serving a music which is to mark lots of aficionados to our greatest joy.
Whatever you may think of these new versions and even if some backward-looking faultfinders, far from being genuine connoisseurs of music, find faults with them, let’s enjoy this music, for this album is already a landmark in Hard Rock.
Add to cart