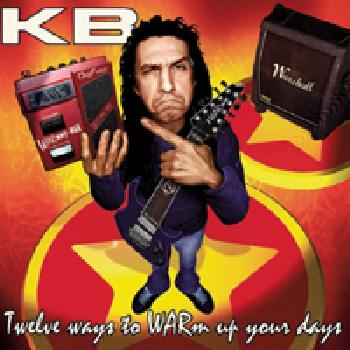 KB was born in 1971 in Paris. He started playing the guitar at the age of 14, took some lessons and started playing in various Parisian combos with whom he recorded several demos. At the same time his first instrumental projects took form: “Fact & Fiction” in 1996 (from which one of the titles appeared on a compilation edited by the British magazine “Guitarist Magazine” in July of the same year) and “Result Of Dysfunction” in 1997. He was also an ESP demonstrator at the “Salon de Musique” that took place in Paris in June 1995.
In 1999, KB was contacted by the group SYMBYOSIS to take part in the recording of their first album, “Crisis”. Following which he collaborated with ARDAG (author, composer and performer for the soundtrack of Cedric Klapisch's film “L’Auberge Espagnole”) in 2003, playing the guitar on his first album and participating in the tour. That same year, he meets DJ SHALOM (bassist and DJ for M), which earned him the honor of appearing on his first record album project, following which he recorded two pieces for M's remix album.
During this time, his professional career took a radically different turn. In 1999 he became a special effects digital artist, then director. He directs his first video clip for WATCHA (“Concrete Lie”, 1999), then “Sans L’Bac T’es Rien” in 2006, for “France Truc” (youth program on the channel France 3), for which he composed the music. For the same program, from 2004 to 2006, KB creates, co-writes and directs "Tete de Truc", a short program for which he also did the soundtrack.
In 2007, he directs his first season of “Face Academy” at NORMAAL Animation, a paper cut-out cartoon series for kids, showed in over ten European countries.
In 2008, KB finishes the composition and recording of 12 instrumental pieces with several friends: Renaud Hantson, DJ Shalom, Steph Barbier & Xav Paladian. For which he directed an animated clip for the song “Sunny Day”.
His first album, “Twelve Ways To Warm Up Your Days” has now finally been released. And is distributed by Brennus Music.
KB obviously has had a very atypical career for a musician, due to his directing ventures. For him, the sound doesn't work without the image and vice versa. Which is why he offers us a global universe that uses these two directive forces, where the image supports and completes the purely musical aspect.
His musical influences are rock/blues. From the age of 6, he went from singers for kids to AC/DC and then from the Sex Pistols to Aerosmith with barely any transition. From early on, he listened to Van Halen, Steve Vai and Yngwie Malmsteen, followed by all the guitarists from the Mike Varney "stable" in the 90's. During the same time, discovering Jimi Hendrix, Uli Jon Roth, Stevie Ray Vaughan, then John Scofield, Django Reinhardt, Rosenberg...
Today, he takes a close interest in the music of upcoming musicians such as Meshuggah, Korn, Ron Thal, Bucket Head,... letting himself become influenced by new technologies and the use of computers in music. Which is what pushes him to reproduce electronic sounds with his guitar and his whammy pedals.
Since his visual influences come essentially from cartoons of the 50’s/60’s (Hanna Barbera, Warner Bros.), he uses the whammy to deform sounds in the manner of the bodies of the characters in his cartoons. Comic films of the 60's/70's also hold an important place in his life, because he loves their music: as a tribute to which he uses in his album the music written by Michel Polnareff for “La folie des grandeurs”.
Thus, KB offers a kind of “package deal” where the image amplifies the musical intention. Through his visual avatar, a likable character, fun and slightly clumsy (like his film idols Louis de Funès, Pierre Richard or even Peter Sellers), he creates an extremely positive universe, eminently humoristic (i.e. the play on the word “War” and his spoofs of several famous brands) and lively, accessible and creative as his music is. KB is well aware that nowadays you have to be seen as much as possible to stand out from other musicians and that the reach of his world will be extended through different medias such as the internet (Youtube, Myspace, Facebook,…) where image and sound are equally important.
KB hence transcends his influences to offer us his global universe where, without taking short cuts, musicality and melody prevail, at the same time carefully thought through and funny, but most importantly - positive and catchy.
Add to cart

Related productsKB - Twelve Ways To Warm Up Your Days :