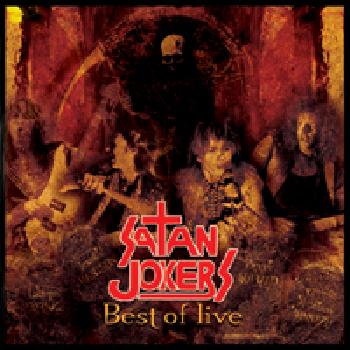 Add to cart
SATAN JOKERS - Best of Live
CD 21 tracks (Hard Rock / France - Paris)
01. Prélude 0’57
02. En Partance pour l’Enfer 3’39
03. La Marche Hérétique 3’52
04. (Bienvenue) au Sabbat 2’29
05. Age de Confusion 3’14
06. Le Fouet 2’19
07. Justice 3’38
08. Pas de Solution 3’57
09. Les Forces Maléfiques 4’14
10. Solo guitare 2’'33
11. Wounded - Knee 73 4’58
12. Solo batterie 3’35
13. Business 3’'12
14. Derrière les Portes Closes 4’00
15. Sorcier 3’'57
16. Get It on 3’'02
17. Solo Basse, Batterie 4’09
18. Les Fils du Metal 4’17
19. Quand les Héros Se Meurent 6’50
20. Commando Suicide 2’52
21. Child in Time 5’56
Maybe the classes his gives on drums and singing and the frequent stimulation of his pupils both did urge on Renaud HANTSON to play rock’n’roll again and to set up a separate musical project called FURIOUS ZOO ("Furioso II" album) and most probably to release a live album by SATAN JOKERS in 2005, almost 20 years after the band split.
At the beginning, the story of this band is quite classic : two teenagers, spending their time in the same school playgrounds, decide one day to set up a rock band. This line-up will show different on all views and with the passing months its realizations would change completely the musical creations of the time. At first, Renaud HANTSON (drums-singing) and Laurent BERNAT (bass) join together and create a duet that everything draws to each other, including jazz-rock in which they will make their début. They soon turn towards heavy-metal by creating JARRETELLES. This trio, that will only last for a while, allows them to prepare seriously the follow-up. Looking for motivated new recruits, the two associates put some adds in the specialized press and hire Pierre GUIRAUD, singer and owner of clothes quite as extravagant as his vocal cords, and Stéphane BONNEAU, guitarist (ex-STRATOS), who integrates the line-up after two "colleagues" were dismissed. We are in December 1981 : SATAN JOKERS is born !
At that time the band records a three-track demo ("Les fils du métal", "Quand les héros se meurent" and "Vices privés"). Isabelle de KERVALEC, the band’s producer (as well as mother of guitarist Stéphane BONNEAU), inks a three-record deal with PHONOGRAM for her favourites. The band’s first LP, already very long-awaited further to noticed TV appearances, is released in the course of year 1983 and preceded by the single "Les fils du métal" / "Quand les héros se meurent". The record is an immediate hit.
From December 1983 to January 1984, the members of the band shut themselves away in a studio to record their second LP. A single, including "Trop fou pour toi" and "Bienvenue au Sabbat", is released a few weeks before a full length album also called "Trop fou pour toi". Comments in the specialized press, previously steady, suddenly become very laudatory. SATAN JOKERS, supported by the whole mass media, starts a French tour of about thirty shows and pays to Belgium a short visit too. The four piece combo is now part of the steady values of French hard-rock.
The third album is released in 1985 and shows a return to the pure heavy-metal of the first stage of their career. With a majority of songs composed by Renaud HANTSON, the band proves with this 6-track mini-LP that it has everything to become the French JUDAS PRIEST or IRON MAIDEN. Surprisingly, SATAN JOKERS splits the next year, after a last French tour. Renaud HANTSON starts then a solo career, mixing albums on his own and successful musicals, with his known talent. Anyway, getting bored at the moment in the world of French variety programmes when he puts TV or radio on, Renaud proves that a man never really changes and his love for rock is still intact. Having found again the live tapes that appear on the CD you hold in your hands, he demonstrates that he most probably influenced what’s happening on today’s hard and metal prog stage. He’s also kept his début’s cynicism. You only have to read the postscript on the "liner note" of the SATAN JOKERS’ Best Of Live to understand that, if he was a forerunner in the 80’s, he’s still a special artist today :
"PS : You certainly know it, in 1985 the third record of the band was a 6-track mini-LP and, it’s no use hiding it, I’m quite delighted to thumb my nose at a certain policy of the multinational firms that don’t even wish to let this type of music be republished by small labels for fear it doesn’t bring in enough dough… Profit, always profit. It’s true, songs in a drawer and records in a closet, it brings in so much more. You will find the whole six tracks from this third SATAN JOKERS LP (that certainly won’t be republished thus) as live versions and, as for me, I think they are pretty better ones… Thank you then to this stupid attitude of the "majors" and to my drawers for having well preserved those tapes so that we can relive these concerts.
Add to cart