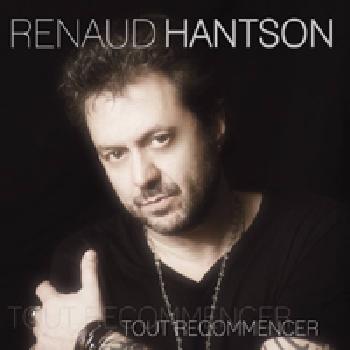 After a Best Of in 2009, an album combining the best songs from musicals and opera Rock in 2011 and the reissue of two albums in late 2012, Renaud HANTSON is back with a new 100% unreleased CD titled "Tout Recommencer". A clear title for a singer who confessed in two very personal books ("Poudre aux yeux (Sexe & Drogues & Show business)" and "Homme à failles") his decision to end the drug addiction he lived with during 18 years and his desire to communicate his experience with others and do prevention.
The artist is back with a strong desire to go further and with the most beautiful songs he has ever written. Beautiful but also darker because this album is mostly about a painful breakup with his wife (titles like "Amour Agonie", "Comme un Homme Qui Se Noie", "Pour Que Tu Sois Là" or "Briser le Silence"). The difficult journey of the addiction Renaud Hantson has lived is found in "Poudre aux Yeux", a song that borrows the title of his autobiography. The singer also dedicates a song to his deceased father with the track "Je Savais Déjà".
Hantson is an artist with a big heart, he’s now in charge of the association "Together against multiple sclerosis" for whom he has written the title "Un Pas Vers le Ciel" He’s never where you expect him artistically and gives a surprising version of Katty Perry’s worldwide hit "Teenage Dream".
A more Pop Rock sound also can be heard with "Intimide-moi" or "Simple idéal" on the words of Maryline Richer and the famous humorist Pierre Palmade appears on the lyrics of the song "Pardon". Don’t forget to have a listen to the irresistible satire of the music business on "Et Bien Dansez Maintenant", a potential hit single and a very funny video available on YouTube and Dailymotion. Hantson also talks about divorce when a child is in between with the song "Tu Disais" and about ecology in the title track of the album "Tout Recommencer"...
Fourteen songs that will please the most loyal fans and seduce the others by their diversity. The voice of Renaud HANTSON wanders between painful memories, emotion, tenderness and Rock n’Soul. An artist at the peak of his art, a vocals masterchief who proves he still has a lot to teach to other french singers. We can count on him in the coming years and Michel Berger was not mistaken in calling him "the best singer of his generation".
Surrounded by his pianist Didier Escudero who co-realised the album but also by the exceptional guitar player Michael Zurita and many excellent musicians, Renaud Hantson has found working partners at the height of his talent. No doubt the people who love real soulful voices, will love this winning come back after five years without an album with 100% new songs.
Add to cart