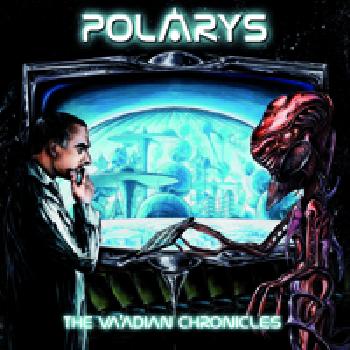 The Va'adian Chronicles is a concept album, narrating a whole science-fiction story from the first track to the last one. The action takes place at the dawn of the 26th century, and starts 30 years after the outbreak of a devastating war between Humans and another evolved race known as the Va'adians. The scene often changes along with the songs, as the course of actions is related by different characters, including members of a Human commando, a mysterious and disturbing scientist, regular soldiers, and even Va'adian protagonists. Each of those characters has a role to play, and as the story unfolds, the truth and the secret behind this war will finally be revealed.
The sleeve was entirely painted with gouache by science-fiction illustrator Christian Jeanjean, and represents key moments of the story.
Polarys is a Parisian metal band at the crossroads between heavy, thrash, prog and power metal subgenres. Its music comes within the scope of a very detailed science-fiction universe, in the space-opera oriented story and concept as well as in the futuristic imagery of the band.
In 1996, Douchan Djukic (guitars & vocals) founds the band under the early name of Blaster with bassist Vincent Danhier (The Old Dead Tree, Ommatidia). A large part of his early lyrics are already based on science-fiction themes and in 1997, the band, renamed Polaris, then Polarys records its first demo album as a power trio. This eponymous 7-track demo allows Polarys to open for bands such as Kickback (along with Oversoul and Watcha) or Vulcain.
Nevertheless, undermined by frequent line-up changes and internal tensions, the band splits in 2000. Everything is questioned and Douchan decides to make a fresh start. He then conceptualizes his music around a metal space opera and recruits new musicians, while entering a long process of composition and arrangement. In addition, he befriends science-fiction painter Christian Jeanjean, who will thereafter achieve the band's future illustrations, using the gouache painting technique.
Sly becomes the new bassist in April 2003 and the band releases in June 2004 the second demo, named Lost, which is made up of three home-recorded tracks. In 2005, Polarys welcomes Fabio, who was at the time the keyboardist of Hevius, and whose role will be essential in order to bring out the required atmospheres. In 2007, seasoned drummer Onov joins the band. The members of the band then enter the studio, flanked by young guitar prodigy Symheris (S-Project, T.A.N.K., Zuul FX), and record their first real album, "The Va'adian Chronicles". This proves to be a very long working phase but also a difficult period for the band, who will nevertheless become more united than ever, with a furious urge to come back on stage.
In May 2010, from then on wearing their combat armors on stage, Polarys is the first band to inaugurate the popular Parisian Glam Rock & Heavy Metal boat parties. In October, with the promotional version of the album in hand, the band hits the bull's eye with a 45mn-long showcase at the Virgin Megastore of the Champs-Elysées in Paris. In April 2011, guitarist Lino comes into the band. The album is then partially re-recorded, remixed and remastered. In 2013, Polarys signs a distribution contract with French label Brennus Music.
« Polarys is the missing link between Dream Theater and Stratovarius. » (KAOSGUARDS)
« The most original Parisian heavy metal band, thanks to their space opera oriented atmospheres and lyrics. » (HEAVY LAW)
« Impressive technique, catching riffs, surprising melodies, [...] Polarys is a truly good band. » (SOIL CHRONICLES)
« Having a very good technical level, Polarys can undeniably compete with its models. » (HARD ROCK MAG)
Add to cart