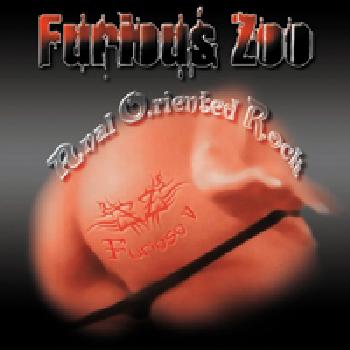 FURIOUS ZOO is singer-drummer Renaud HANTSON’s “parallel project”. The man is not a newcomer on the French musical scene. His achievements aren’t scarce. With the group SATAN JOKERS, he released 7 albums including “SJ 2009” and “Fetish X” with the actual line-up, 8 solo albums including many hits, videos, tours and TV shows, he also took part in several musical projects. Well-known for his roles in the Rock-opera “Starmania”, he also “embodied” James Dean in the title-role of “La légende de Jimmy”, another rock-opera by Michel Berger and Luc Plamondon. More recently, he performed the rôle of Gringoire in “Notre Dame de Paris”. Therefore, he can be considered as the only genuine French rock musician to succeed in a more “popular” genre. With the support of Philippe KALFON (Nh3, Shakin’ Street) the guitarist, Julien LOISON the bassist and drummer Joe STEINMAN (Big Ben), Hantson’s over-energetic band set the stage and the public on fire during each of their performances, on account of the combined effect of the experience of outstanding musicians and the spontaneity of a new group who love to “scour” clubs and whose prevailing motivation and goal is sheer pleasure. The latest album “Furioso IV”, recorded with the help of guitarist Olivier SPITZER (new guitarist with Satan Jokers) contains forteen titles in English, including a cover of “Down on the Street” by the Stooges, but also possible metal classics like “Get out of My Way”, “H Bomb Child” or “Rock Messiah”, sophisticated songs like “The Furious Zoo”, “Tonight”, “No More”, “Dangerous Game” or “Tough Enough” and a duet called “A Dead Man Won’t Lie” with ZOUILLE (the former singer of Sortilège). The elapsing years and the effects of a somewhat “Rock-and-Roll” way-of-living, don’t seem to have a hold on HANTSON, who keeps looking and sounding younger and more energetic as time goes by. In the solid prospect of a new hyper-powerful album, regular concerts and hardcore fans, FURIOUS ZOO proves that the band sounds stronger than ever now, the months to come will, undoubtedly, be wildly “furious” for sceptical minds who thought that it’s not allowed to love different musical styles or that Renaud HANTSON didn’t want to play Hard Rock anymore !!!... With the 2010 fifth album “A.nal O.riented R.ock - Furioso V” (HANTSON’s allusion about “Album Oriented Rock” american radios), the band is now more mature and clearly Big Rock oriented (Journey, Mr. Big, Toto...) and is prepared to play on stage future FURIOUS ZOO’s classics like “Who Is Who”, “Tied Up”, “Insomnia”, “Big Boobies”, “Make Me Believe”, “Locomotive Breath” (Jethro Tull) or more emotional tracks like “Heal Me” and “I’ll Go Alone”...
Add to cart