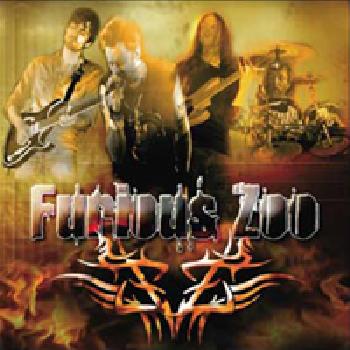 FURIOUS ZOO is singer-drummer Renaud HANTSON’s “parallel project”. No doubt that, as far as he is concerned, FURIOUS ZOO’s functions and effects are multifarious. First of all, it enables him to give free expression to his double talent. Then, it helps him forget, for a while, that what generated his passion for music, that is-to-say, artistic liberty, musical creative mixing and blending, as well as technical quality, doesn'’t mean much, nowadays, in a “show-business” in which ratings and subsequent profits prevail and lead to the generalization of “formatting” and “standardisation”, advertising, submission to the needs and “laws” of television and radio programmes, and, as a consequence, to a whole system largely based on a commercial “management” of the careers of standardized, then, interchangable and, consequently, ephemeral “stars”. Finally, FURIOUS ZOO is a good and necessary breath of fresh air and a simple source of sheer bliss he regularly indulges in. Renaud Hantson just felt like recovering the pleasure of playing melodious Hard Rock, with a variety of titles and musical ambiances in which his voice can express all its specificity, thoroughly and freely, and bring out all its nuances, between strength and subtlety, in the tradition of Glenn Hughes (ex-Deep Purple), the hero of his teen age and his friend since 1993.
FURIOUS ZOO is the fulfillment of Hantson’s desire for direct contact with the public that artists can only get by performing in small concert-halls or, even, rooms, in clubs or bars, in festivals, etc... , which he had never done before, except on the occasion of some memorable and improvised “jam-sessions”. His performing with FURIOUS ZOO engenders the bliss of playing genuine Rock music, real personal compositions (those on “Furioso II” released in 2005, those on “Furioso III”, a CD mixing studio and live recordings, released in 2006, or those on the DVD of the group, released in 2006, too, and including interviews, studio and live recordings.), but, also, some old “standards” of the 1970’s, by Hendrix, ZZ Top, U2, Thin Lizzy, Deep Purple and many others.
With the support of the outstanding talents of Benoît COUSIN, the guitarist, Cédric LE COZ, the bassist (both ex-Spectrum, Rock Four) and drummer Joe STEINMAN (ex-Stallion, Big Ben), Hantson’s over-energetic band set the stage and the public on fire during each of their performances, on account of the combined effect of the experience of outstanding musicians and the spontaneity of a new group who love to “scour” clubs and whose prevailing motivation and goal is sheer pleasure.
The new album, recorded with the help of guitarist Olivier SPITZER (Stators, Rebel, Oskar) contains forteen titles in English, including a cover of “Down on the Street” by the Stooges, but also possible metal classics like “Get out Oof My Way”, “H Bomb Child” or “Rock Messiah”, sophisticated songs like “The Furious Zoo”, “Tonight”, “No More”, “Dangerous Game” or “Tough Enough” and a duet called “A Dead Man Won’t Lie” with ZOUILLE (the former singer of Sortilège). The elapsing years and the effects of a somewhat “Rock and Roll” way-of-living, don’t seem to have a hold on HANTSON, who keeps looking and sounding younger and more energetic as time goes by. (A pact with the Devil has been mentioned !...). In the solid prospect of a new hyper-powerful album, FURIOUS ZOO proves that the band sounds stronger than ever now, the months to come will, undoubtedly, be wildly “furious” !
Add to cart